Being lucky enough to work for something of an pioneering ITIL adopter back in the late 1990s, I guess I was a CMDB practitioner earlier than most.  Back in those days, there was little “off-the-shelf” CMDB technology, and even automated discovery was in its infancy, with little adoption. But we were driving our ITSM initiative ambitiously, and every year the ITIL auditors would come and score us. We needed a CMDB pretty quickly, and it was clear we needed to built it ourselves.

This was great, because it meant we got to make all the usual CMDB mistakes early.  In our case, we only started to get it right third time.

On our first attempt, we built a tool that wasn’t really up to the task of holding the data we needed to hold.  That was definitely our fault, although ITSM platforms were pretty simplistic back then too.  With no off-the-shelf CMDBs to buy or to benchmark against, we were pretty much on our own, and we got our design wrong. We abandoned that, and tried again.

The next system was much better, but our implementation was marred by a second big error.  This mistake was driven by the received wisdom of its day, inspired by ITIL version 2 itself and its definition of the CMDB as…

Great, that’s clear. We need everything.

Unfortunately, despite ITIL having long cleared up its story, and technology bringing us clever tricks like data federation, the same fundamental mistake still gets made today.  In fact, it gets made a lot.

This type of failure is characterized by an approach that is founded on the data sources for the CMDB, not the required outputs. 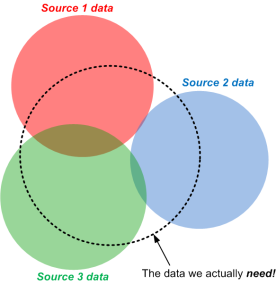 Suddenly, the organization faces the realization that having made their CMDB out of “everything”, their “everything” is both too much and not enough.  It’s too much, because a whole bunch of data is being included, expensively, for which there is no actual end result.  At the same time, it’s not enough, because the outputs we actually need are not completely supported by the data in the CMDB anyway, due to two key problems – gaps, and overlaps:

This mistake is devastating to a project, but it’s completely avoidable, if some basic fundamentals are followed in any CMDB initiative:

Of course, as the middle diagram above illustrates, some data sources might actually provide more data than the initial requirements set requires.  For example, automated discovery tools may gather a lot more information than is initially needed.  This isn’t necessarily a bad thing: future requirements or investigative data mining might each benefit from this data.

If there’s little extra cost to maintaining this extra data (as might be the cost if it’s automatically supplied by discovery tools), then it might be worth hanging on to. If it’s complex, manual, time consuming, and doesn’t support any outputs, then why bother?